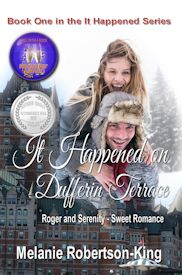 Toronto business consultant, Serenity Layne, knew the only person she could depend on was herself. Busy with her career, she has no time for other pursuits and life's intangibles

Widowed for three years, Roger Scott, a data security specialist in Quebec City, is a single parent to his ten-year-old son, Adam.

On a day out on the Plains of Abraham with their black Labrador Retriever, Roger's cell phone rings incessantly. Adam has played matchmaker and put his father's profile on a number of online dating sites.

The week before Christmas, Serenity is heading up a series of meetings after a six-month study of the Canadian retail chain, jonathans. After an unpleasant encounter with one of the store managers, she escapes from the boardroom of the Château Frontenac Hotel, only to be bowled over by Roger and Adam's dog.

Guilty over the accident, Roger invites Serenity out for a drink by way of apology. Over the course of the week, and spending time together, feelings long dormant for Roger are re-awakened. At the same time, emotions foreign to Serenity fill her with contentment and happiness.

Will the couple get their happily ever after?